After having talked about the specific conditions that images need to be stored in, today we want to look at a very special example that is worth taking a second look. The time and location of the image had been left out in the description. As you will see in today’s article, an image that may seem unspectacular at first can be the anchor point for a much larger story to be told – when having sources at hand that allow scientific work and comparison.

This image which is part of the Schmid-Maybach family private collection has been published before in ‘Karl Maybach – seine Motoren und Automobile’ (Karl Maybach – his Engines and Automobiles). Harry Niemann published the book in 2004 on the occasion of the 125th birthday of Karl Maybach. The book which provides a concise overview of the biography and work of Karl Maybach is available in German as well as English. Its focus is on the different cars that were produced at Maybach Motorenbau and not only shows a great selection of images but also breaks down the technical aspects in an easily-digestible manner.

In this photograph Karl Maybach is sitting on a chair outside, reading a book. His hand is on his forehead and clearly shows how absorbed he is in his read. In the background, we can see birches and a low building with a rather specific shape of the window frame. In this image, Karl Maybach seems to be in his seventies when one compares it with other examples.

Referring to our collection it allowed us to do the comparison necessary to further pin down the date and context in which this image had been taken. We looked at other images from that era and it quickly became clear that the overall makeshift situation and these distinct trees lead to one conclusion : that it was taken at a specific moment in the Maybach history – the years that some of the workers at Maybach Motorenbau and Karl Maybach himself had been relocated to Vernon in France after WW II.

To explain how a part of the company ended up there one needs to look back at the role Maybach Motorenbau had during the years of WW II. During the war, Maybach Motorenbau had developed the majority of engines for track driven vehicles of the German army. This marks a dark era in the Maybach history as in those years forced laborers had to work in Friedrichshafen and at other companies which had obtained a license to manufacture Maybach engines. 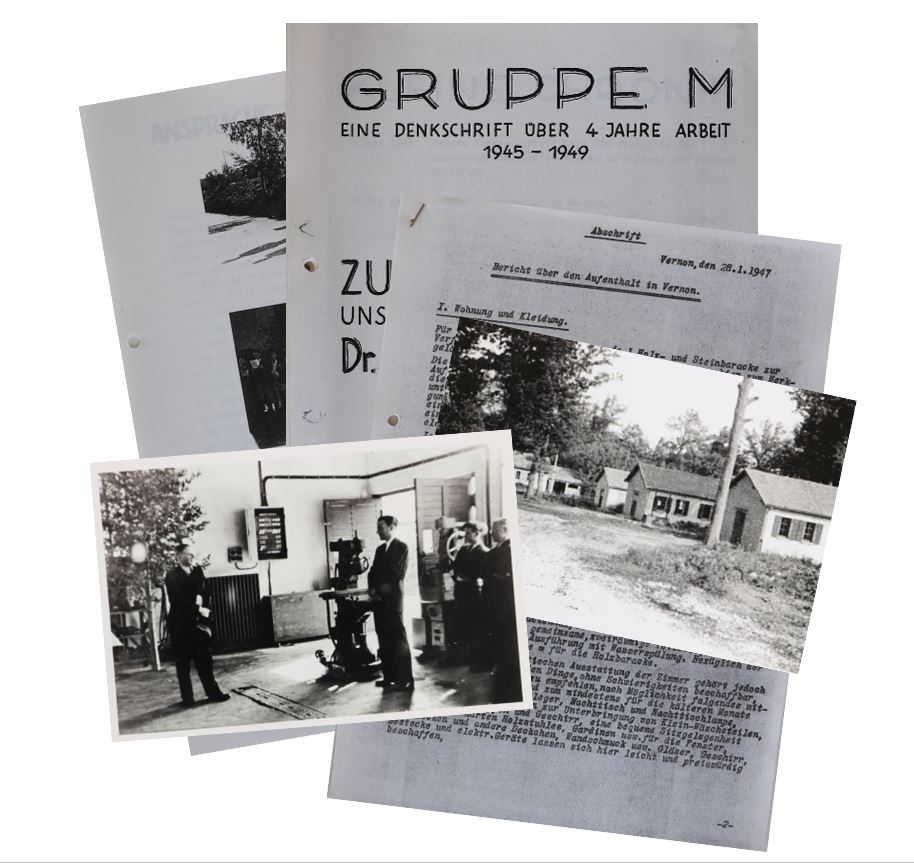 After WW II Friedrichshafen and the ‹motorworks› to a large degree lay in ruins as a consequence of the bombardments by the allied forces. Among the allied troops it was the French who secured the region as part of their occupation zone. The standard process for a company that had been part of the so-called ‹Third Reich’s› military industry was to be dismantled. Part of the machinery indeed was transported to France while the still remaining parts of the company in Friedrichshafen became a reparation workshop for the French. In parallel, the French demanded that Maybach would further pursue its developments in tank engines – but outside Germany. On the 12th of September of 1946, an agreement was signed to develop a new 1,000 hp engine.

A group of about 70 people, many of whom rather young, was recruited from the remaining staff at Maybach Motorenbau. The so-called Groupe M, short for ‘Groupe Maybach’, moved to Vernon in December 1946 which had been defined by the French government as a site for new military developments. Karl Maybach followed with his family in June 1947. The conditions were difficult in the beginning. For example, there have been accounts that there was no running water. One of these sources is a report written just after the events. It has only very recently entered the collection and has proven to be a valuable material in the identification of the image we are looking at today. The « Report on the stay in Vernon » also affirms the adverse conditions. It also describes that Karl Maybach protested and conditions were improved consequently. Against this backdrop of rather poor conditions the team nevertheless managed the task, they were given. The result was the HL 295 P, a 1,000 hp engine which ended up being an enlarged version of the HL 234 engine type, a prototype constructed during the final phase of the war. As the HL 295 P was running on gasoline it became clear that a diesel engine with similar constructive traits would also be important as it was more easily adapted to civil applications, the rail especially. The result was the HL 337 and 338 experimental engines.

These developments turned out to be an extremely valuable asset. They could easily be translated to civil applications and that is exactly the strategy that Maybach Motorenbau was pursuing in the years after. The 1950s became the time that the MD series of fast running diesel engines (short for Maybach Diesel) was introduced, largely based on developments made in Vernon and precise market studies. It was built in a modular fashion and thereby could be built in many different specifications – from a three-cylinder variant to a 16 cylinder one. The product ended up being very successful and powered ferries, generators, and trains. Engines that still maintain some constructive features of those days are still built in Friedrichshafen to this day.